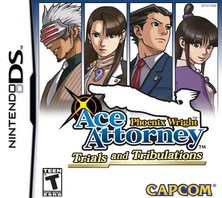 The defining battle for justice is about to begin as animated characters and cliffhanger storylines come to life in a courtroom where anything can happen. The complete story of Phoenix Wright comes together as players explore both the past and present of the idiosyncratic lawyer.

Players star as a defense attorney, who must prove a seemingly guilty client?s innocence no matter how dire the circumstances may seem. Phoenix will face the toughest prosecutor yet as the mysterious hard-boiled ?Godot? will try to take him down at any cost. Players must collect evidence, survey crime scenes, weed through inconsistent testimonies, and overcome corrupt agendas to ensure that justice prevails. With the return of the popular ?psyche-lock? interrogation tool from the previous title, Phoenix Wright?: Ace Attorney? Justice for All, players will have to overcome even more intense courtroom standoffs in order to close the case.

Play from the first person perspective through five intriguing new cases Colorful cast of characters Phoenix Wright ? the game?s main character who is an accomplished defense lawyer with a keen sense for discerning fact from fiction Maya Fey ? a bright young girl that aids Phoenix in his trials; she harnesses her psychic powers which are useful in a pinch Mia Fey ? an ace attorney who taught Phoenix everything she knows about the courtroom and continues to support him Godot ? the mysterious, hard-boiled prosecutor makes his appearance Play as two lawyers ? relive Mia?s rookie days from the past and Phoenix?s current cases in the present Two distinct gameplay segments: Investigation phase ? survey crime scenes, interview witnesses and gather evidence that will be used in court Court phase ? present findings from the investigation to support your case, listen to testimonies and examine witnesses ?Psyche-Lock? system ? break down tough witnesses with a series of correct questions or catch them on inconsistencies Touch screen interface progresses players through the game Microphone can be used to yell ?Objection!? and ?Hold it!? as you cross examine witnesses