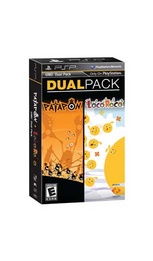 This compilation from Sony offers PSP gamers two quirky and colorful action titles from SCE Japan Studio. Players can guide six different kinds of spheroid creatures through 40 levels of platforming in LocoRoco, or they can lead a tribe of silhouetted eyeball-like warriors through 30 rhythm-based missions in Patapon.

Bring home two best-selling PSP games- Patapon and LocoRoco - together for one low cost! The peaceful world of the LocoRoco are under attack by the not-so-nice Moja Corps! As the planet where the LocoRoco inhabit, you must move them through more than 40 levels of slippery slopes, teetering platforms and maze-like passages. For years the Patapon tribe has lived in the desolate frontier, driven from their home by the evil Zigoton army. Behind the Patapons' cute exterior, lies a fierce warrior spirit that can only be commanded by the beat of their God's war drum. They wait for the day that the "Almighty" will return, to lead them against their enemies and bring them back to their homeland. Finally, their wait has come to an end as the drums of war are heard once again.