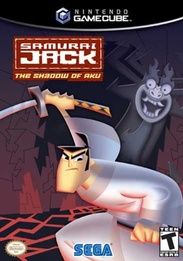 Based on the hit Cartoon Network series, Samurai Jack: The Shadow of Aku lets players assume the title role and live the life of the famed warrior. As Jack, players will traverse 4 realms to rescue prisoners and defeat enemies, including Aku, Mad Jack, and the Scotsman. Combo moves and the Sakai Mode add a stylish layer to the combat system, allowing players to do greater damage or slow-down the action for more precise hits. Interactive environments allow players to cut ropes, blast doors, and more to solve puzzles and enter hidden areas. Samurai Jack is a combination of action and fantasy, with a touch of comedy that is sure to appeal to both kids and adults.