The Game: The First Season 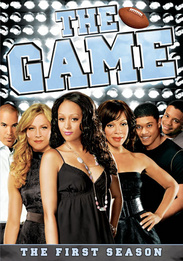 Being the wife or girlfriend of a pro-football player might sound like a glamorous and stress-free existence, but Melanie Barnett (Tia Mowry) is about to discover the truth. Melanieâs boyfriend, Derwin, is the new third-string wide receiver for the San Diego Sabers. While Derwin worries about the plays on the field, Melanie learns about the power plays that NFL wives use to get their men the best agents, managers, endorsements, merchandising deals and even the âinâ charity. As she deals with egos, groupies and image consultants, Melanie is finding out how âthe gameâ is played among the women behind the athletes.