Mike Birbiglia: What I Should Have Said Was Nothing 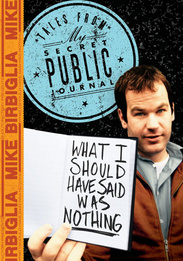 What I Should Have Said Was Nothing: Tales from My Secret Public Journal is comedian Mike Birbigliaâs long-awaited debut on DVD. Filmed in New York City, this 90-minute special captures Mike at his best; dry and self-effacing but with a keen perspective on the events in his life where he should have said... well, nothing. The DVD includes bonus footage not seen on the television special and an exclusive tour documentary entitled âStrictly For Fans.â

The material on the DVD is a âbest ofâ the material from his critically acclaimed Comedy Central Records releases Two Drink Mike and My Secret Public Journal Live, the latter of which was named the best comedy album of 2007 by Time Out NY and Time Out Chicago in addition to âBest of 07â mentions in The Boston Globe, Denver Post, and Las Vegas Weekly. Mikeâs Secret Public Journal, a weekly blog that Mike shares with thousands of email subscribers and reads to millions on the nationally syndicated Bob and Tom Show as well as on Public Radio Internationalâs Fair Game, has a David Sedaris-esque quality.