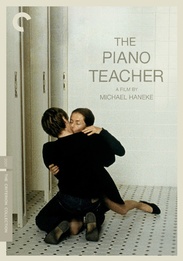 Academy Awardâwinning Austrian director Michael Haneke shifted his focus from the social to the psychological for this riveting study of female sexuality and the dynamics of control, an adaptation of a controversial 1983 novel by Elfriede Jelinek. Haneke finds his match in Isabelle Huppert, who delivers an icy but quietly seething performance as Erika, a middle-aged piano professor at a Viennese conservatory who lives with her mother, in a claustrophobically codependent relationship. Severely repressed, she satisfies her masochistic urges only voyeuristically until she meets Walter (BenoÃ®t Magimel), a young student whose desire for Erika leads to a destructive infatuation that upsets the careful equilibrium of her life. A critical breakthrough for Haneke, The Piano Teacherâwhich won the Grand Prix as well as dual acting awards for its stars at Cannesâis a formalist masterwork that remains a shocking sensation.

Rated R for aberrant sexuality including violence, and for language.