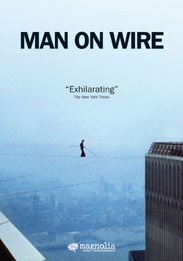 On August 7th 1974, a Frenchman named Philippe Petit stepped out on a wire illegally rigged between New York World Trade Center's twin towers. After nearly an hour on the wire, he was arrested and taken for psychological evaluation. This documentary incorporates Petit's footage to show the numerous extraordinary challenges he faced in completing the artistic crime of the century.

Rated PG-13 for some sexuality and nudity, and drug references.