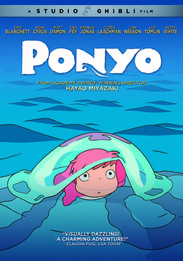 Welcome to a world where anything is possible! Academy Awardâwinning director Hayao Miyazaki (2002, Best Animated Feature, Spirited Away) and legendary filmmaker John Lasseter together with Disney bring to life a heartwarming and imaginative telling of Hans Christian Andersenâs classic fairy tale The Little Mermaid. Plus, this 2-disc DVD and Blu-ray includes never-before-seen bonus features that take you on a journey deep into the filmâs enchanted world. A young boy named Sosuke rescues a goldfish named Ponyo, and they embark on a fantastic journey of friendship and discovery before Ponyoâs father, a powerful sorcerer, forces her to return to her home in the sea. In defiance, Ponyo releases the magical water of life, and chaos reigns until balance is restored to the world they cherish. Ponyo will delight your family with its magnificent animation and timeless story.