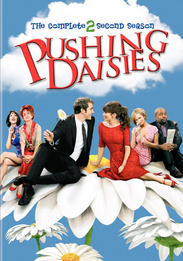 Dig into a delicious second helping of Pushing Daisies, the multiple EmmyÂ® Award-winning series that USA Today's Robert Bianco calls, "a wholly original, rich-hued delight." In this season, Papen County's Pie-Maker with a witching finger for waking the dead and his alive-again love Chuck have more on the menu than a Terrifying Bee-Man and a Deep Fried Chicken Magnate. The secrets are served deep-dish when family skeletons -- both literal and figurative -- loom over the Pie Hole and its patrons. As jockey cum waitress Olive Snook joins a nunnery to mend her broken heart, the Pie-Maker who broke it hides Chuck from her Aunt Vivian and mother Lily, who believe she's dead. Naturally, this results in resurrecting Chuck's father, who actually was dead. Private Investigator Emerson Cod has daddy issues of his own when his baby-stealing baby-mama finds herself at the center of a damned dam murder case. This wondrous, witty and moving confection is as irresistible as the Pie-Maker's three-plum pie.