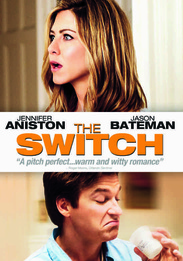 Jennifer Aniston and Jason Bateman star in âThe Switch,â an offbeat comedy about Kassie, a smart, fun-loving single woman who, despite her slightly neurotic best friend Wallyâs objections, decides itâs time to have a baby â even if it means doing it by herself... with a little help from a charming sperm donor (Patrick Wilson). But, unbeknownst to her, Kassieâs plans go awry because of a last-minute switch that isnât discovered until seven years later when Wally finally gets acquainted with Kassieâs precocious â though slightly neurotic â son.

Rated PG-13 for mature thematic content, sexual material including dialogue, some nudity, drug use and language.