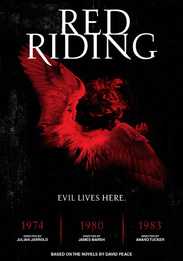 Three films come together to form one overwhelming cinematic experience in THE RED RIDING TRILOGY, the widely acclaimed trio of British thrillers about a mysterious  and perhaps related  series of gruesome crimes in Northern England.

Based on events that occurred over a turbulent decade in the West Riding district of Yorkshire, England, THE RED RIDING TRILOGY presents a dark and disturbing world of serial murders, child abductions and police corruption. The three films in THE RED RIDING TRILOGY are connected by recurring events and characters, chiefly a deeply conflicted police detective, Maurice Jobson (David Morrissey, The Other Boleyn Girl, Sense and Sensibility), and ruthless high-ranking official Harold Angus (Jim Carter, Alice in Wonderland, Shakespeare in Love). Three directors utilize a different method for each film  Julian Jarrold (Become Jane) shoots in 16 mm film for 1974; James Marsh (Man on Wire), in 35 mm for 1980; and Anand Tucker (Leap Year, Shopgirl), in digital video for 1983. In the end, they've created a modern crime epic in which no one escapes undamaged.