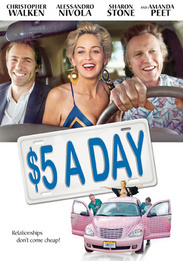 Christopher Walken is hilarious as Nat, an eccentric con-artist and deadbeat dad ding to reconnect with his troubled son, Flynn (Alessandro Nivola). Diagnosed with a terminal illness, Nat shanghais his reluctant son into driving him cross-country for experimental medical treatment, pulling off increasingly ridiculous and embarrassing schemes along the way to reach their destination on only $5 a Day. Boasting a star-packed cast that includes Sharon Stone, Amanda Peet and Dean Cain, $5 a Day is an irresistible comedy about letting go of the past and choosing your own road.