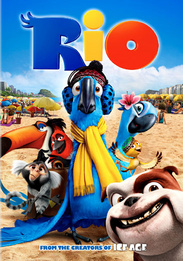 Captured as a young bird from the wild, Blu (Jesse Eisenberg, The Social Network) is a domesticated Spix Macaw living thousands of miles away from his homeland, Brazil. When his human owner Linda (Leslie Mann, 17 Again) discovers that he is the last male of his kind, they head south to Rio de Janeiro to meet the only other female.

But itâs far from love at first sight between the socially-awkward, flight-challenged Blu and the fiercely independent, high-flying female, Jewel (Anne Hathaway, The Princess Diaries). Shortly after Bluâs arrival, the two rare birds are captured by greedy animal smugglers and find themselves lost in the Brazilian rainforest. Unexpectedly thrown together, they embark on a hilarious and clumsy adventure where they learn about friendship, love, courage and spreading oneâs wings to fly.