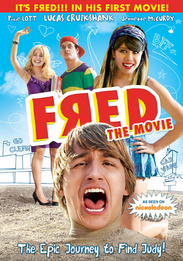 Join Fred in his hilarious journey to find Judy! Hey, itâs Fred in his first movie! And he is in love with the girl next door, Judy (Pixie Lott). But his nemesis neighbor, Kevin, thwarts all attempts Fred makes to see her, and when he finally succeeds in making it over to Judyâs house â sheâs moved! With the advice of his super cool dad (John Cena), Fred embarks on an epic journey full of gut-busting fun to find her. So, jump in the kiddie pool and join Fred, Bertha (Jennette McCurdy), and the whole gang for a hilariously good time in FRED: THE MOVIE!