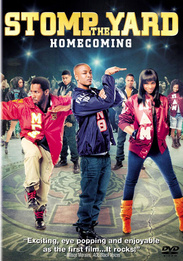 In the countdown to a national step-off, rivalries at Truth University run red hot. The Theta Nus are counting on new pledge Chance Harris (Collins Pennie) to lead the team to victory. But heâs too caught up in his own problems to focus. At odds with his father, caught up in romantic troubles and targeted by a street gang for an unpaid debt, Chance must decide what is truly important and make the choices that will shape his life. Stomp the Yard: Homecoming unites a powerful cast featuring Terrence J and Pooch Hall with a soundtrack packed with pulse-pounding tracks.

Rated PG-13 for some violence, sensuality and language.