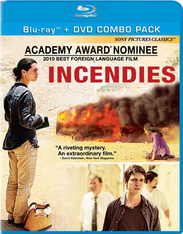 In the highly-acclaimed suspense thriller Incendies, a mother's dying wish creates a painful puzzle her children are forced to solve. At the reading of their mother's will, twins Jeanne and Simon are given instructions to locate the father they believed was dead and the brother neither knew existed. They travel to the Middle East, to piece together the story of the woman who brought them into the world only to make a shocking discovery.

Rated R for some strong violence and language.