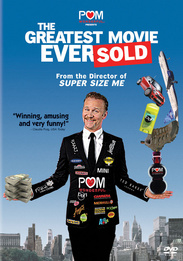 Boundary-pushing OscarÂ®-nominated filmmaker Morgan Spurlock explores the world of product placement, marketing and advertising in POM Wonderful Presents: The Greatest Movie Ever Sold, a film that was fully financed through product placement from various brands, all of which are integrated transparently into the film. While using brands in film promotion is not new for Hollywood, it certainly is new territory for the documentary format. Spurlock exploits the phenomenon to new heights, with everything from branded pizza boxes and in-flight film promotions to branded-everything in-film. With humor and insight, POM Wonderful Presents: The Greatest Movie Ever Sold unmasks the marketing process to bring audiences behind closed doors directly into the pitch meetings and marketing presentations which ultimately inform our everyday entertainment decisions. Sponsors were provided with brand category exclusivity. The brands that agreed to sponsor the film placed Spurlock front and center in their brand campaigns and advertisements, both on and off-line. Partners have the unique right to promote themselves in association with Spurlock and the film as "The Greatest." The agreements also stipulate that Spurlock maintains creative control of the film's content and final edit.

Rated PG-13 for some language and sexual material.