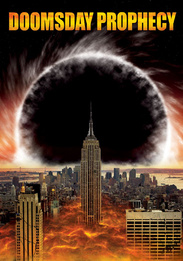 It begins with massive earthquakes. The Black Sea disappearing into the earth. Vast chasms spreading into populated areas. And the worst is still to come! Jewel Staite ("Stargate: Atlantis," "Firefly") and A.J. Buckley ("CSI: NY," "Supernatural") star in this paranormal thriller about the hunt for a moder-day Nostradamus who has predicted a celestial phenomenon that can annihilate nations and kill millions. Will the alignment of our solar system with the galactic equator lead to a globally cataclysmic disaster, or just a whole lot of creepy visions, shocking chaos and awesome destruction?

Rated PG-13 for violence and peril.