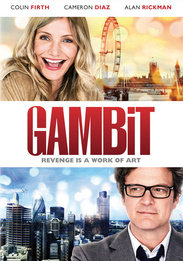 Harry Deane (Colin Firth) is a man with a plan. Art curator for media tycoon Lord Lionel Shabandar (Alan Rickman), Harry devises an elaborate plot to con his abusive boss, Shabandar, into purchasing a take Monet painting. With the help of beautiful rodeo queen PJ Puznowski (Cameron Diaz), Harry hatches a scheme to fool Shabandar into believing that Harry's expert forgery is the real deal, pocketing a hefty sum in the process. But with the con proving harder to pull off than they had first intended, Harry and PJ find themselves in increasingly hilarious situations in order to see the job through to the end.

Rated PG-13 for some suggestive content, partial nudity and a rude gesture.