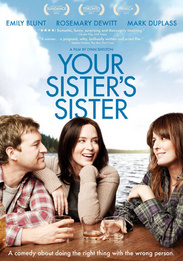 Following the success of her Sundance award-winning film HUMPDAY, Lynn Shelton weaves another compellingly human story in YOUR SISTER'S SISTER. Lost in an emotional funk one year after his brother's death, Jack (Mark Duplass) takes his best friend Iris (Emily Blunt) up on her offer for a reflective week of solitude at her family's remote island retreat. Upon arriving at the house, Jack discovers that Iris' sister Hannah (Rosemarie DeWitt) had the same idea, and the two spend an awkward evening together. Iris shows up the next morning unannounced, setting in motion an emotionally twisted tale of sisters, brothers, and best friends. Shelton once again honestly explores the complexities of interpersonal relationships while gently poking fun at her characters' predicaments.