A Return To Salem's Lot 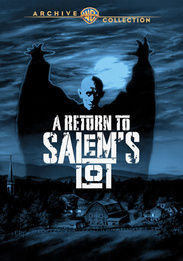 In a certain New England town, it's hard to keep the undead down. It's shocking story continues courtesy of Larry Cohen, a maestro of cinematic horror (the It's Alive trilogy) and writer of police-action thrillers (Best Seller, Maniac Cop), tapping into his senses of the macabre as well as satire in a clever chiller based on characters created by Stephen King. Joining in to bedevil and terrify are Michael Moriarty as an anthropologist asked to write a "bible" for the town's ghastly group, Andrew Duggan as the leader of the town folk (including June Havoc and Evelyn Keyes) who hide their blood-feasting bent behind sweet exteriors and filmmaker Samuel Fuller in a rare on-screen role as a vampire hunter. For mortals who occasionally like to go to the devil -- and come back -- A Return to Salem's Lot is one terrific terror trip.