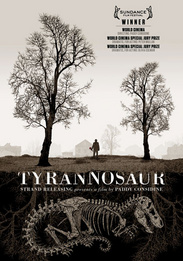 TYRANNOSAUR follows the story of two lonely, damaged people brought together by circumstance. Joseph (Peter Mullan) is an unemployed widower, drinker, and a man crippled by his own volatile temperament and furious anger. Hannah (Olivia Colman) is a Christian worker at a charity shop, a respectable woman who appears wholesome and happy. When the pair are brought together, Hannah appears as Josephâs potential saviour, someone who can temper his fury and offer him warmth, kindness and acceptance. As their story develops Hannahâs own secrets are revealed â her relationship with husband James (Eddie Marsan) is violent and abusive â and as events spiral out of control, Joseph becomes her source of succor and comfort.