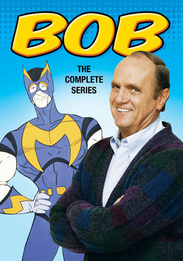 Newhart portrays Bob McKay, the creator of the 1950s comic book superhero "Mad-Dog". When a Senate sub-committee decided such reading material could corrupt young readers, Mad-Dog faded into oblivion. Bob became a greeting card artist, and years later Mad-Dog is revived when the American-Canadian Trans-Continental Communications Company buys the rights to the series. Complications ensued when AmCanTranConComCo head Harlan Stone (John Cygan) insists Mad-Dog should be a bloodthirsty vigilante rather than the hero Bob originally created. Bob initially turns down Harlan's offer to revive the series with the publisher, but after his wife, Kaye (Carlene Watkins) reminded Bob that Mad-Dog would never give up dreams in the face of defeat, he decides to compromise with Harlan on creative direction, and the two became a team.