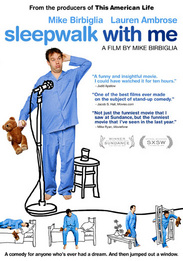 "I'm going to tell you a story and it's true... I always have to tell people that," so asserts comedian-turned-playwright-turned-filmmaker Mike Birbiglia directly to the viewer at the outset of his autobiographically inspired, fictional feature debut. Birbiglia wears his incisive wit on his sleeve while portraying a cinematic surrogate. We are thrust into the tale of a burgeoning stand-up comedian struggling with the stress of a stalled career, a stale relationship threatening to race out of his control, and the wild spurts of severe sleepwalking he is desperate to ignore.

Based on the successful one-man show, SLEEPWALK WITH ME engages in the kind of passionate and personal storytelling that transfigures intimate anguish into comic art.

Rated PG-13 for some sexual content and brief language.