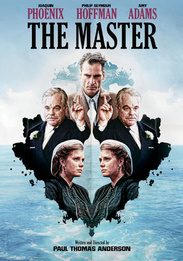 A striking portrait of drifters and seekers in post World War II America, Paul Thomas Anderson's THE MASTER unfolds the journey of a Naval veteran (Joaquin Phoenix) who arrives home from war unsettled and uncertain of his future -- until he is tantalized by The Cause and its charismatic leader (Philip Seymour Hoffman).