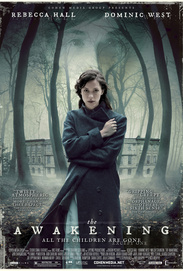 London 1921. Florence Cathcart, Cambridge's first female PhD, sets out to debunk claims of ghost sightings in post-WWI England. But when she investigates a boy's death and "haunting" at a boarding school, her scientific resolve surrenders to a personal fight for survival in the face of the unexplained.

Rated R for some violence and sexuality/nudity.