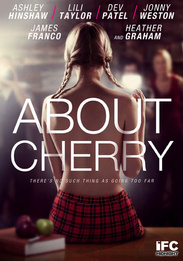 This bold debut film by author Stephen Elliott, a visual love letter to San Francisco, is the story of high school student Angelica (a mesmerizing Ashley Hinshaw), whose choices lead her from a depressing home life and dead-end job in Los Angeles to the fetish-filled Bay Area adult film world. A stepfather with dark motives lurks in the background, as Angelica watches over her younger sister and questions her options. In memorable supporting roles are Festival favorite Lili Taylor as Angelicaâs manic and opportunistic mother, Jonny Weston as her sexy but sleazy boyfriend and Dev Patel as best friend and much-needed nonsexual support. The vibrant cast also includes James Franco as a coke-addicted attorney who spots Angelica in a strip club, and Heather Graham as a female porn director who launches âCherryâsâ adult film career with mixed feelings. A gritty and defiantly voyeuristic look at the life of a youth who never loses her innocence, even as she gyrates for the camera, Cherry captures a rare point of view, urging us to consider the delicate tension between body and self by focusing on societyâs most sought after objects of desire.