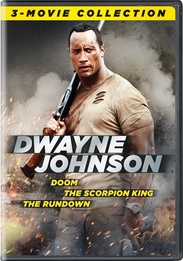 Doom
A frantic call for help from a remote research station on Mars sends a team of mercenary Marines into action. Led by The Rock and Karl Urban, they descend into the Olduvai Research Station, where they find a legion of nightmarish creatures, lurking in the darkness, killing at will. Once there, the Marines must use an arsenal of firepower to carry out their mission: nothing gets out alive. Based on the hugely popular video game, Doom is an explosive action-packed thrill ride!

The Scorpion King
Unleashing Dwayne Johnson as the most fearsome warrior of the ancient world, The Scorpion King plunges you into a sweeping tale filled with stunning fight sequences, awe-inspiring battles and pulse-pounding action.

The Rundown
Beck (Dwayne Johnson) is a bounty hunter sent into the treacherous jungles of the Amazon to bring the rebellious Travis (Seann William Scott) back to the States. When Beck and Travis reluctantly join forces to hunt down a priceless treasure, this unlikely team embarks on a pulse-pounding, non-stop thrill-ride.

Doom
The Rundown
The Scorpion King