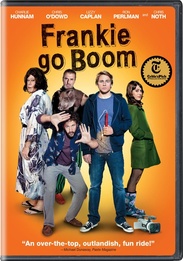 Frank Bartlett has been tortured, embarrassed and humiliated by his brother Bruce - usually on film - his entire life. Now that Bruce is finally off drugs and has turned his life around, things should be different. They are not.

Frankie Go Boom is a raucous comedy about a boy (Hunnam), a girl (Caplan), their sex tape (embarrassing), the boy's brother who has put it online (O'Dowd), the transgender hacker who may be able to pull it down (Perlman, who looks fantastic in a dress), the psychotic (and armed) movie star father of the girl (Noth), and his pet pig (who we don't know the name of).