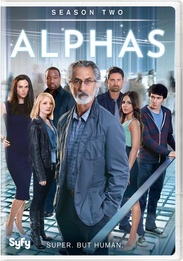 Discredited by the government after revealing the existence of Alphas in Season One, Dr. Lee Rosen (Academy Award® nominee David Strathairn, Good Night, and Good Luck) must re-assemble his now defunct team to face the growing threat of Alpha extremist Stanton Parish (John Pyper-Ferguson, Fringe). With the help of tech-genius Skylar (guest star Summer Glau, Firefly) and memory recorder Mitchell (guest star Sean Astin, The Lord of the Rings trilogy), Rosen and his team must work together to uncover Parish's chilling plan. But with a mole in their midst, can they overcome the dangers that surround them and stop Parish before it's too late?