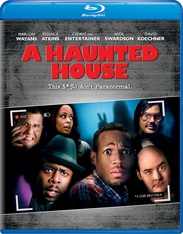 In an outrageous send up of the Paranormal Activity movies, The Devil Inside and other âfound footageâ movies, A HAUNTED HOUSE features young couple Malcolm (Marlon Wayans) and Kisha (Essence Atkins) who have just moved in to their dream house. As they settle in, they quickly find theyâre not alone. But itâs not the house thatâs haunted, itâs Malcolmâs girlfriend who is possessed by a demon. Malcolm hires everyone from a priest to modern day ghostbusters to rid her of this unwelcome intruder, determined not to let the evil spirit ruin his relationship... or, more importantly, his sex life.

Rated R for crude and sexual content, language and some drug use.