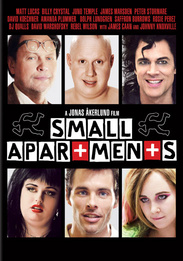 Trapped in a seedy LA apartment, Franklin Franklin (Matt Lucas) has a dead landlord on the kitchen floor and is surrounded by eccentric neighbors: the stoner (Johnny Knoxville) and girlfriend (Rebel Wilson), the wanna-be stripper (Juno Temple) and the artist (James Caan). To add to his chaos, a drunk investigator (Billy Crystal) is questioning him about his landlord. But none of this fazes Franklin. He dreams of Switzerland, and waits each day for an envelope from his institutionalized brother (James Marsden). Then, one day the envelope doesnât come and Franklin becomes unhinged. Little does he know...his crazy brother has the secret that will set him free.

Rated R for language, some violence, sexual content and drug use.