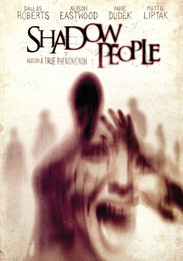 Back in the 1970s, several patients in an experimental sleep study reported seeing shadowy intruders. These patients â and hundreds of others â died in their sleep soon after. Doctors called the phenomenon âSudden Unexplained Nocturnal Death Syndromeâ. They refused to discuss the shadows. Now, a struggling late-night radio host (Dallas Roberts of THE GREY and âRubiconâ) and a skeptical CDC investigator (Alison Eastwood) have begun researching a disturbing new outbreak of shadow sightings and sleep fatalities. Could this be a case of paranoid hallucination, or are these victims literally being scared to death by actual nightmare creatures? Anne Dudek (âCovert Affairs,â âHouse M.D.â) and Mariah Bonner (THE SOCIAL NETWORK) co-star in this supernatural thriller based on true events documenting the authentic existence of SHADOW PEOPLE.