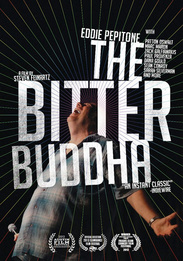 Eddie Pepitone is a man at war with himself. And he has the scars to prove it. The Bitter Buddha takes the viewer backstage in the alternative comedy scene to reveal one of its most undervalued treasures.

This portrait of a comedian looks at Pepitone's offbeat humor and lifestyle as he battles the world around him. Stand-up comedy, original animation and interviews with Patton Oswalt, Sarah Silverman, Zach Galifianakis and others provide insight into this beloved career comedian known as "the guitarist that all the other guitarists go to see."