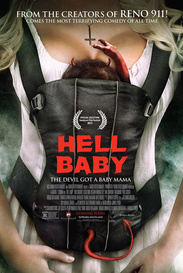 The moment Jack (Rob Corddry) and his pregnant wife Vanessa (Leslie Bibb) move into their ramshackle New Orleans starter home, they realize something isn't right. First an overly friendly guy living in the crawl space (Keegan Michael Key) informs them the house has been the scene of multiple murders. Then a naked old lady appears out of nowhere and sexually assaults a confused Jackâwho fights her off, apparently killing her. Soon Vanessa starts exhibiting odd behaviors: smoking, drinking paint-thinner and occasionally speaking in a deep, guttural voice. But even after her new therapist is found crucified in his office, no one suspects that the thing growing in Vanessa's belly may have something to do with the house's dark legacyâor the increasing chaos around them. When a pair of inept detectives (Rob Huebel and Paul Scheer) fails to solve the mystery, it falls to two seasoned exorcists dispatched by the Vatican (Robert Ben Garant and Thomas Lennon). But even these hardnosed priest-enforcers aren't prepared for the mayhem that lies in store as Vanessa's due date arrives.