The Borgias: The Final Season 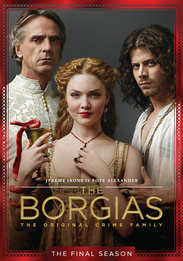 OscarÂ® winner Jeremy Irons stars in THE BORGIAS, the saga of history's most infamous crime family. Conspiring with his ruthless sons and poisonously seductive daughter, the charismatic Rodrigo Borgia will let nothing and no one stand in the way of his relentless quest for wealth and power. Mercilessly cruel and defiantly decadent, intimidation and murder are his weapons of choice in his scandalous ascension to the papacy in Renaissance-era Italy.