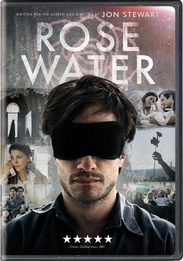 ROSEWATER follows the Tehran-born Bahari, a 42-year-old broadcast journalist with Canadian citizenship living in London. In June 2009, Bahari returned to Iran to interview Mir-Hossein Moussavi, who was the prime challenger to controversial incumbent president Mahmoud Ahmadinejad. As Moussavi's supporters rose up to protest Ahmadinejad's victory declaration hours before the polls closed on election day, Bahari endured great personal risk by submitting camera footage of the unfolding street riots to the BBC. Bahari was soon arrested by Revolutionary Guard police, led by a man identifying himself only as "Rosewater," who proceeded to torture and interrogate the journalist over the next 118 days.

Rated R for language including some crude references, and violent content.