Girl on a Bicycle 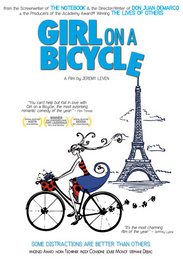 Paolo, an Italian tour bus driver living in the "second most beautiful city in the world", Paris, has just summoned up the courage to propose marriage to his flight attendant girlfriend Greta when, per chance, he encounters the alluring, mysterious Girl on a Bicycle. Infatuation is immediate. Obsession follows. Unable to get the image of this beauty out of his head, he seeks advice from his best friend, the witty and womanizing Derek. In his bumbling attempt to meet the Girl, French model CÃ©cile, Paolo accidentally knocks her over with his bus and his life turns madly chaotic.

Rated R for some sexuality, nudity and language.