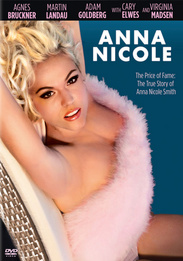 Anna Nicole Smith (Agnes Bruckner) was a single mother from Texas who became the biggest supermodel in the world, but her sudden catapult to fame came with a price, as drugs, alcohol and reckless behavior led her down a tragic path. Now you get to see the whole story in this compelling original film, as Anna Nicoleâs sexual desires, crippling addictions and her overwhelming need to be famous lead her from incredible fame and fortune to her unfortunate descent.