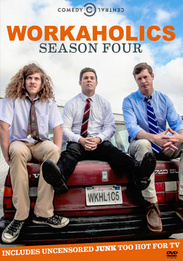 Itâs time to get back to work for coworkers and roommates, âAdam,â âBlakeâ and âDers,â but that also means partying harder than ever before. Comedy Centralâs hit, scripted series Workaholics Season 4 is back with all new super fresh episodes. They do their jobs and sometimes they even do them well, but they show up late, leave drunk and always live for the dayâ¦even if they donât know what day it is. Whether theyâre hanging out at their house in Rancho Cucamonga or getting ready to rage at a Renaissance Faire, the guys find trouble wherever they go.