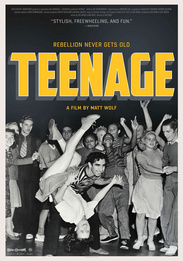 Teenagers didn't always exist. They had to be invented. As the cultural landscape around the world was thrown into turmoil during the industrial revolution, and with a chasm erupting between adults and youth, the concept of a new generation took shape. Whether in America, England, or Germany, whether party-crazed Flappers or hip Swing Kids, zealous Nazi Youth or frenzied Sub-Debs, it didn't matter - this was a new idea of youth. They were all "Teenagers."

A hypnotic rumination on the genesis of youth culture from the end of the 19th century to the first half of the 20th, Matt Wolf's TEENAGE is a living collage of rare archival material, filmed portraits, and diary entries read by Jena Malone, Ben Whishaw, and others. Inspired by Jon Savage's book and set to a shimmering contemporary score by Bradford Cox (Deerhunter / Atlas Sound), TEENAGE is a mesmerizing trip into the past and a riveting look at the very idea of "coming-of-age."