The Americans: The Complete Second Season 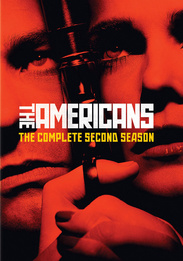 One of televisionâs most exhilarating series, The Americans, returns for Season 2 â with more danger, more intrigue and more steamy alliances. Technological advances have escalated Cold War tensions to an all-time high, and undercover KGB operatives Elizabeth and Philip Jennings (Keri Russell and Matthew Rhys) face the growing threat of discovery. As their assignments grow more deadly, their family is in more danger, and their loyalties are tested like never before in this thrilling series.