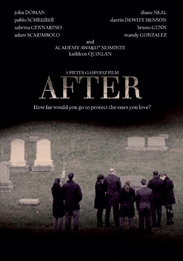 Set in the winter of 2002 in chilly upstate New York, AFTER tells the story of a middle class family struggling with the financial consequences of a failing family business and a series of intergenerational conflicts and rivalries. But, what truly threatens to upset their delicate balance-- and shatter the emotionally fragile family matriarch, (played by Academy Award-nominee, Kathleen Quinlan)-- is an intricately buried secret that, if revealed, could alter their lives irrevocably. A searing study of denial, deception, and self-delusion, AFTER is also a powerful portrait of the lengths we go to protect those we love.