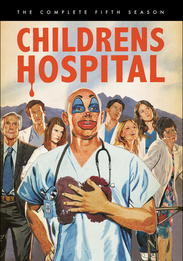 The most medically accurate hospital drama in the history of recorded media (not really), EmmyÂ®-winning CHILDRENS HOSPITAL returns for another season to find the doctors relocated to a pediatric clinic on a U.S. Army base in Osaka, Japan. With the loss of recently murdered co-worker Dr. Blake Downs still fresh in their minds, the doctors find that life in Japan tests their solidarity in ways it has never been tested before. Conflicts arise with everyone â from the Army bureaucracy to the Yakuza â in a series of new adventures that include a star-studded USO show, a wine tasting held during an operation, a chaotic âold fashionedâ day where modern medicine is forbidden and the closing of Ward 7 for patientsâ imaginary friends. The tension culminates in an explosive two-part season finale, in which the doctors are thrust onto the front lines of an enemy attack.