Two and a Half Men: The Complete Twelfth and Final Season 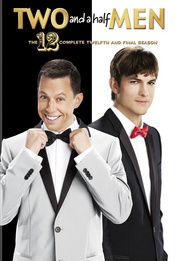 When Walden Schmidt (Ashton Kutcher) nearly kicks the bucket, he decides itâs high time he stops waiting for the right woman to live a meaningful life. Unable to adopt a kid as a single dad, he pops the question to his long-time roommate and best friend Alan Harper (Jon Cryer)â¦ and the result is a match made in Malibu! But will a friends-without-benefits marriage put a damper on their freewheeling lifestyle? As Alan and Walden struggle to become mature role models for their adorable foster child, Louis (Edan Alexander), thereâs no stopping the happy couple from doing the manly things they love most!