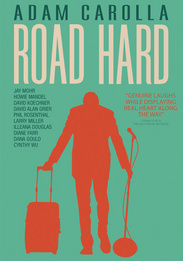 After his movie and television career has run dry, Bruce Madsen (Adam Carolla) is forced to go back on the road playing one dingy comedy club after another, spending endless nights in budget hotel rooms and always flying coach. Amidst trying to revitalize his career, rekindle his love life and put his daughter through college, Bruce knows one thing for sure - he must get off the road. ROAD HARD is the story of that journey.