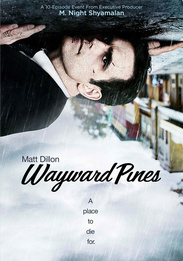 From Academy AwardÂ® Nominee M. Night Shyamalan, and based on Blake Crouchâs best-selling books, comes the pulse-quickening, supernatural event series of the year! After a car crash he canât remember, Secret Service agent Ethan Burke (OscarÂ® Nominee Matt Dillon) wakes up in a hospital in a strangely idyllic mountain town in Idaho. But the more Ethan tries to find out what happened to him, and to two missing fellow agents, the more he discovers that nothing is as it seems in Wayward Pines. Desperate to learn the truth and return to his family, Ethan eventually unveils a terrifying secret that affects all of mankind in this thrill-a-minute series also starring OscarÂ® Nominee Terrence Howard and OscarÂ® Winner Melissa Leo!