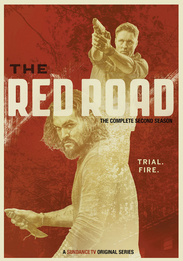 THE RED ROAD is a gripping dramatic thriller that centers around two clashing communities: a Native American tribe and the small town with which they are forced to coexist. The long awaited federal recognition of the tribe has exacerbated decades-old tensions and unearthed a history that will plague both the tribe and the town. The fates of Harold Jensen, a local cop, and Philip Kopus, a mesmerizing ex-con are once again inexorably tied as the relationship between their communities becomes increasingly volatile and outside forces try to exploit the tribeâs newfound status for their own gains. This season Kopus must endure his own version of an âordeal,â a Native American test of courage and fortitude that either leads to redemption or death. These trials take the form of threats to his family and tribe, both from outside and within. For Harold, he knows his wife Jean no longer sees him as the person he once was and so he strives to be promoted to captain of the police force, which he hopes will restore him in Jeanâs mind. But every time Harold does whatâs right, he seems to inadvertently jeopardize his familyâs future. Jean is struggling to keep her schizophrenia under control both for herself and her family; while, also searching for answers in her past about her brother and father that may help to unlock present-day mysteries. Rachel Jensen is confronting a new pressure â a belief that she may one day turn out like her mother. Junior must decide if he will follow in Kopusâ footsteps living a life at odds with the law or if he will choose another life for himself with Rachel. Marie, Juniorâs adoptive mother, has sought redemption for the past twenty years over past mistakes, however, new events will force her to compromise her ideals. The tribe and the community must decide their futures after they are ravaged by the deaths of some of their most prominent members. Harold and Kopus continue their uneasy alliance in order to protect community and family.