The Facts of Life: The Complete Eighth Season 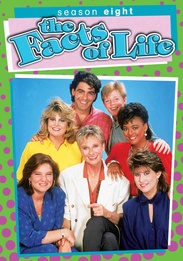 When Edna Garrett finds love, the girls are understandably overjoyedâbut it turns bittersweet when they realize that their longtime friend and mentor will be leaving them. Ednaâs sister Beverly Ann (Academy Award winner Cloris Leachman*) steps in to keep an eye on them, but as the year passes and graduation from Langley College looms for Blair and Jo, it appears that the winds of change that haven't finished blowing just yet.

Other highlights of Season Eight include a rockin' trip back to the 1960s, an Eastland girls reunion featuring some familiar faces for longtime fans of the series, guest appearances by George Clooney and pop star Stacey Q., and a surprising, hilarious murder mystery in which no one-and we mean no one- is truly safe. Continue your collection of one of your all-time favorite sitcoms with The Facts of Life: Season Eight.