It's Always Sunny in Philadelphia: Season 10 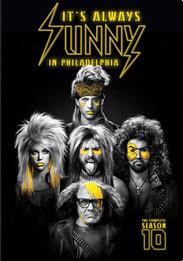 Celebrate a decade of debauchery with Season Ten of TVâs most outrageously funny comedy. Join your favorite demented bar owners for a new round of misguided dreams and blundered schemes. This time around the gang tackles their most hilarious challenges yet: like besting the legendary beer drinking record of baseball's Wade Boggs and conquering the wacky world of online dating. Plus, Mac and Charlie join a cult, Psycho Pete returns from the loony bin and the gang struggles to keep their weirdness under wraps while competing on a TV game show.